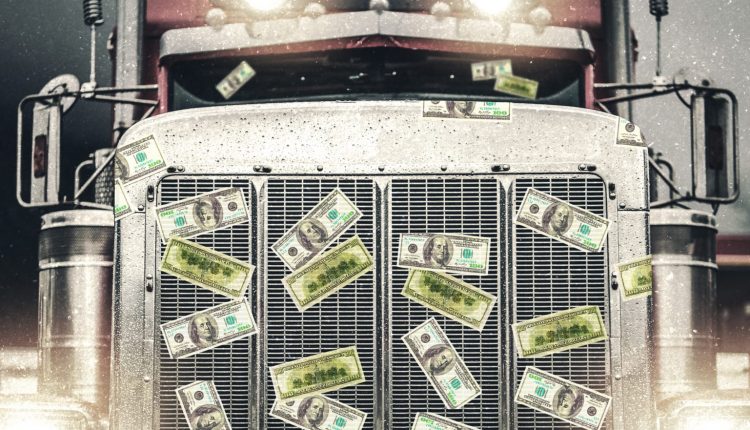 The trucker convoy has largely been making it up as they go, but truckers are grumbling that they don’t know the endgame or what all the donations have been used for.

Two weeks after departing Victorville, California—with the humble goal of completing a few laps around the D.C. Beltway—the only real commerce that the right-wing People’s Convoy trucker protest seems to have interrupted is the business of some of its participants.

But despite some initial confusion and a handful of bloopers, the protest is still going, if not strong then at least steady.

Thousands of truckers and anti-mandate cheerleaders—bivouacked since Friday night about 90 miles from D.C. at a dirt-track speedway in Hagerstown, Maryland—appear to have locked their jaws on a mission. Some mission. Any mission. Whatever it may be.

First, the convoy purported to be about opposing national vaccine mandates. But then, people kept pointing out that the Supreme Court had already struck down President Joe Biden’s proposed vaccine mandate. Then, it seemed to be about drawing attention to a general, anti-COVID restrictions, anti-Biden, Let’s-Go-Brandon road trip, culminating in a traffic jam on the Beltway.

But just like that circular highway itself, there seems to be no terminus.

The group has already stuck it out longer than previously expected, and they don’t seem to have plans of quitting anytime soon. Organizers told The Daily Beast that the size of the convoy, already about 10,000 strong, has actually increased this week amid a surge of media coverage. But the longer they hang around, the more questions arise—about the money, the mission, and the people behind it all.

And in the small, fractious world of independent trucking, the rumors have already begun to fly.

For starters, many Convoy leaders are actually experienced industry lobbyists, and some participants are wondering what their angle may be. For many of the actual truckers, they put their jobs on hold to join the rolling demonstration. And yet, those who signed up for action watched with disappointment and frustration as the project appeared to morph into a last-minute lobbying campaign. Some donors have expressed confusion about the funding and the mission, wondering whether the convoy will “finish what they started.”

The ad hoc, figure-it-out-as-we-go mentality has raised all sorts of questions about whether the organizers have hewed to the law—or if the People’s Convoy has been, intentionally or not, a scam.

And according to fundraising totals, that’s looking like a $2 million question.

Former Assistant U.S. Attorney Natalie Adams, now a partner at Bradley LLP, told The Daily Beast that the convoy and its sponsor, the AFCLF (American Foundation for Civil Liberties and Freedom) might have some explaining to do.

She pointed to the convoy’s website, which says explicitly that “100% OF THE DONATIONS GO TO SUPPORTING THE CONVOY!”

“A prosecutor would look at what’s communicated on that site to see what someone would reasonably believe that money would be spent on,” Adams said, noting that if they do not intend that all funds are really going to be used “on a road trip to straighten out our problems,” that would be misrepresenting.

But convoy organizers haven’t exactly been clear about what “supporting the convoy” really means—or what the convoy’s mission even was to begin with.

Some members were surprised to learn the protest was staying outside city limits. Although the convoy made that much clear in an early media statement, the group publicly has been less direct, letting the destination stand as “D.C. area,” “east coast,” or “Beltway area.”

By contrast, the protests in the Canadian capital of Ottawa, which the People’s Convoy cites as inspiration, went into the city and caused mass economic disruption.

“From the outside looking in, it’s hard to see where that money is going,” said Jared Holt, a researcher and Daily Beast contributor who studies American right-wing movements. “This has also frustrated some amount of people in the group’s Telegram chat rooms, who claim to have donated while anticipating a more dramatic protest. They fundraised and stockpiled as if they were going to camp out in the streets of D.C., but instead they’re kicking dirt at a racetrack in a city most D.C. residents have never even visited.”

But such meetings weren’t part of the convoy’s communications before last weekend, and wouldn’t necessitate the attendance of thousands of out-of-state truckers. In fact, organizer Mike Landis runs a trucking lobbying group called the United States Transportation Alliance, and has made numerous trips over the years to meet lawmakers face-to-face. In 2020, his group joined a protest that lasted three weeks and culminated in a White House visit.

Maureen Steele, right-wing activist and convoy organizer, explained they had been “too busy with the convoy” to plan the lobbying project, adding that “it’s always been in the back of my mind.”

In a video posted to social media over the weekend, another antsy participant said, “There is plans [sic] in action and doing anything prematurely is going to be a detriment to us. There’s reasons [sic] for what we’re doing.”

One trucker live-streaming his Hagerstown adventures took issue with the leadership. “There are a couple of guys grumbl[ing],” he said in a video uploaded Wednesday, likening the situation to “too many chiefs and not enough Indians.”

At a Monday group meeting conducted from the flatbed of a truck, disappointed truckers vented about lead organizer Brian Brase, adding that if they couldn’t take action at the moment, they should still do something, even if they have to “save it for last.”

That sentiment has foreboding undertones in Washington, and some truckers already suspect a Jan. 6 setup is playing out before their eyes.

Organizer Mike Landis accused right-wing conspiracy theorist Jacob Wohl of being a “paid actor” attempting to sucker the Convoy into a trap, after Wohl urged them to act more boldly in D.C. while offering any trucker that does such $200.

Asked Wednesday how the People’s Convoy compared to the spirit of the riot, Bonnie Kelly said, “You mean being set up by the FBI and the CIA?”

The energy at Hagerstown, Kelly told The Daily Beast, was different, purified of liberal “bad actors” that in her telling were behind all the trouble on Jan. 6. (There is no evidence to support any of Kelly’s claims about the riot.) Still, The People’s Convoy, she said, was in for the “long haul.”

Of course, not all of them are built to last.

Despite the promise of remuneration, select drivers said they did not expect returns, and had written the costs off ahead of time.

Jim Worthington, a convoy trucker from Buffalo, New York, told The Daily Beast on Sunday that he brought five trucks with him to Hagerstown. However, he said he would have to get back to work this week, noting that the lost time had already cost him $50,000 in invoices.

While some convoy-goers hope they will be made whole, others appear more or less satisfied with a fuel truck making its rounds at the venue to mete out gas, as truckers express increasing frustration over record-setting diesel prices.

But according to Chris Marston, who runs the American Foundation for Civil Liberties and Freedoms nonprofit which manages the donations, drivers like Worthington appear to be outliers. The convoy’s size, he said, is increasing.

“It grew in the last 24 hours,” Marston told The Daily Beast on Wednesday morning, after the group canceled the day’s sojourn due to light rain downtown.

While Marston wouldn’t share recent numbers, he said that money was coming in “every minute” and easily keeping up with costs, mostly for “fuel, lodging, showers, potties—nothing sexy, but public support seems high.”

“I would like to organize a donation for this bag for the next 10 minutes,” he declared. The money, he said, would go to “volunteers” that have been riding along with the convoy in “support vehicles” on the Beltway.

Tactics like passing the plastic shopping bag only cast more doubt that the nonprofit is properly tracking donations.

The Convoy’s daily fundraising tally on its website appears to have frozen on Saturday at $1,656,876. The day before, The Washington Post reported that a director of Marston’s nonprofit had a warrant out for fraud. The report sparked paranoia among some protesters, and perhaps at the AFCLF. The group deactivated its “leadership & organization” webpage that same day, according to archived versions of the site. Marston confirmed that Milacek remains on the board.

Adams, the former Assistant U.S. Attorney, noted that large events will always carry overhead. “But if the organizers fudged those promises, or made the group sound more accountable or made the money sound more directed for a purpose than it really is, then we get into possible fraud territory,” she said.

Kevin Steichen, former president and co-founder of the Landis-led lobbying group United States Transportation Alliance, could not afford to join the People’s Convoy, but warned that the tightly knit trucking community harbored its own toxicity—and that the convoy could be its own undoing.

“The convoy’s great and what they’re doing is awesome,” Steichen told The Daily Beast. “I’ll tell you something, though: This industry is fickle, fickle people. Trust issues are huge.”

“There’s been some shady shit that goes on. People come in, and they want to do it for personal gain,” Stechen said, acknowledging rumors of financial mischief and a simmering impatience among convoy members ready for action.

“You get a group of people together who pour their heart and soul into something, damn near lose everything they have, and there’s still people out there that want to criticize it,” he said.

Some Of The Factors You Need To Consider When Starting Vaping