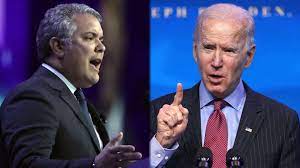 President Biden on Thursday designated Colombia as a major non-NATO ally during a visit to the White House by Colombian President Iván Duque.

“I’ve said for a long time Colombia is a keystone to our shared efforts to build a hemisphere as prosperous, secure and democratic,” Biden said during a meeting with Duque and other White House officials.

“Today I’m proud to announce that I intend to designate Colombia a major non-NATO ally … that’s exactly what you are,” he added. “This is a recognition of the unique and close relationship between our countries.”

The $2 Million Question: What Did the D.C. Trucker Convoy…

The designation makes it easier for those countries to purchase U.S. weapons and collaborate on other security issues.

Colombia has been a key partner of the United States in managing issues like migration in South America, particularly as scores of Venezuelans flee the country under Nicolás Maduro’s leadership.

The U.S. has also touted close ties with Colombia given its democratic government. Colombia is holding presidential elections in May, and Duque is ineligible to run for another term.

Russia shifts stance on hospital bombing condemned around the world